skip to main | skip to sidebar

Näyttely "The Light of Letters"

Exhibition "The Light of Letters"

The Embassy of the Republic of Bulgaria in Helsinki welcomes you to the exhibition “The Light of the Letters” at Eurooppasali. The exhibition will be presented from 4th of September to 1st of October 2013. The exhibition consists of 24 panels, representing medieval manuscript monuments of the Glagolitic and subsequently of the Cyrillic alphabet – one of the three officially recognized alphabets in the European Union.

Imagined Interregnum:
Disintegration and Re-Establishment of Russian Academic Networks in 1917–1924


Programme of the Colloquium

09:45-10:30 Keynote Lecture: Lukáš Babka (Slavonic Library, Prague): Prague as the Center of Russian Science Abroad (1918–1945): The Role of Inter-War Czechoslovakia in the Work of Russian (and Ukrainian) Emigrant Scientists and the Possibilities of Contemporary Research

13:30-15:30, Session 2: Scientists, Politics and Networks
Aleksandr Dubrovski: Non-formal Organizations of Scientists (1917-1924)
Ianina Kruglikova: Academician M.I. Rostovtseff and the Activity of the Russian Liberation Committee in London 1919 – 1922
Olga Patrikeeva: Fedor Rodichev – the Minister of the Provisional Government by the Affairs of Finland (March–April 1917)
Danil Posadnikov & Leonid Sukhorukov & Polina Kostina: Finland in Fates of the Scholars of the St. Petersburg Academy of Science and St. Petersburg State University in the Post-revolutionary Period
Chair: Jussi-Pekka Hakkaranen

12:30-15:15 Session 5: Establishing Academic Relations with Soviet Russia
Vladimir Nikiforov: Effect of Foreign Academic Contacts on the Russian Scientific and Technical Intelligentsia Emigration from Soviet Russia since 1917
Peter Gorlyakov: Lack of Culture and Interculture: Teaching the Foreign Languages ​​at Higher School in 1917 – 1924
Elena Elts: State Protection of Cultural Heritage in Soviet Russia
Irina Petrova: Why St Petersburg did not Became the Capital of the International Congress of Historical Sciences in 1918: pro et contra
Natalia Nikiforova: The Image of American Technology in Soviet Public Discourse of 1920s and the Formation of Capitalist Myth
Chair: Kirsti Ekonen

15:45-17:15 Session 6: Academic Institutions in the Changing World
Ludmila Dubjeva: The Evacuation of Yuryev University in 1918 and Fates of Historians Having Worked There
Larisa Nikoforova: Imperial Palaces of St. Petersburg in 1917-1924: Political Challenge and Reorganization of Scientific Relations in the Art Historians’ Community
I. Alferova & V. Blohin: Socialist Academy as a “Government Plan in the Ideology Field"
Yevgeniy Kodin & Maxim Kail: Establishment in the Time of Destruction: the Formation of Provincial Universities’ Network in the Soviet Russia in 1918-1922. The Case of the Smolensk University
Kirsti Ekonen: Lost Opportunities of Finnish Russian Studies: the Case of Sergei Korff
Chair: Ianina Kruglikova

The Society of Finnish Slavists (Suomen Slavistipiiri ry.) has a privilege to present Patrick Flack, a Researcher at the Charles University, Prague who will visit Helsinki to give a lecture

Abstract: Structuralism can be said to have begun its evolution at the latest at the turn of XX century, mostly in Central and Eastern Europe. The strength of the myth created by the success of French theory in the 1960s and 70s (Lévi-Strauss, Barthes, Lacan), however, has overshadowed this evolution and left a largely under-explored field. The talk will attempt to sketch out a broad panorama of structuralism's often dramatic but productive early history in Austria, Czechoslovakia, Germany and Russia.

About the lecturer: Patrick Flack is a researcher in the Central European Institute of Philosophy at Charles University, Prague. He is working on his post-doc in Comparative Literature and Intellectual History, with a special focus on Central and Eastern Europe and a strong background in semiotics, literary theory, philosophy and the history of linguistics. His current project is devoted to the history of structuralism during the interwar.

About the organizer: The Society of Finnish Slavists (Suomen Slavistipiiri ry.) is a scientific society devoted to advancing research of and knowledge about Slavic languages and cultures in Finland. 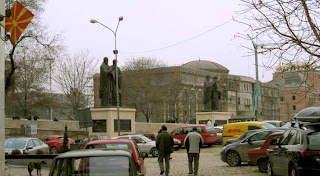